The 19th Amendment: A Timeline

The 19th Amendment: A Timeline


Before the 19th Amendment, women were told they could not vote because their anatomy was inferior, their brains were too addled with chocolate, they needed to conserve their energy for child-bearing, and if enfranchised they would emasculate men, neglect their children, die alone, and even “turn back the hands of time.”

The dire warning of women as time benders was opined by William T. Sedgwick, a respected professor at the Massachusetts Institute of Technology and published by the New York Times in 1914. Sedgwick added, by way of assurance, “Hence it will probably never come, for mankind will not lightly abandon at the call of a few fanatics the hard-earned achievements of the ages.”

If the objections to women’s suffrage seem absurd now, it’s only because of the generations of activists who fought to make it so — a campaign of persuasion that took many lifetimes.

In honor of the centenary of the 19th Amendment, here’s a look at some of those crusaders and a timeline of the evolution of women’s rights in the United States.

1600s – Women’s status in the New World is of varying degrees of unfree, with enslaved women of color the least free. Regardless of race, age, marital status, or birth, women are defined by their dependency.

1769 – The colonies adopt the English system decreeing that women cannot own property in their own name or keep their own earnings.

1777 – All states pass laws denying women the right to vote. 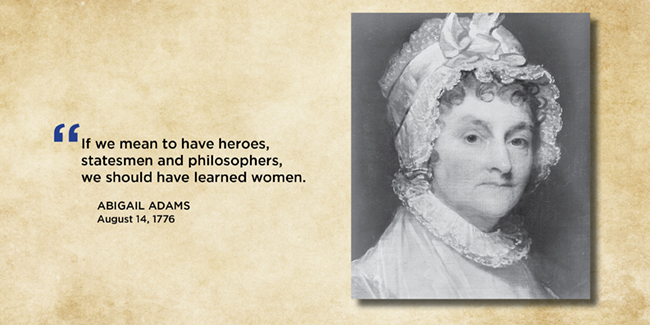 1838 – Sarah Grimké writes “Letters on the Equality of the Sexes and the Condition of Woman,” a series of letters asserting that men and women should not be treated differently, since both are endowed with innate natural rights. Grimké denounces the injustice of lower pay, denial of equal education to women, and sexual objectification.

1839 – Mississippi becomes the first state to grant women the right to hold property in their own names — with permission from their husbands.

1848 – At the first Women’s Rights Convention in Seneca Falls, New York, Elizabeth Cady Stanton writes “The Declaration of Sentiments,” a plea for the end of discrimination against women. The declaration is signed by 300 women and men.

1851 – At a women’s rights convention in Akron, Ohio, Sojourner Truth, a former slave, delivers her historic speech “Ain’t I a Woman?”

1861–1865 – The Civil War eclipses the suffrage movement. Women are encouraged to put their energies toward
war efforts.

1866 – The 14th Amendment is passed by Congress, defining in the Constitution “citizens” and “voters” as “male.” The amendment is ratified two years later.

1870 – The 15th Amendment is ratified. Women are not specifically excluded, but neither are they included.

1872 – Sojourner Truth demands a ballot and attempts to vote in Battle Creek, Michigan, but is prevented.

Susan B. Anthony casts her vote in the presidential election for Ulysses S. Grant to test whether the 14th Amendment could be interpreted to include women’s suffrage. She is arrested and convicted in Rochester, New York, of “unlawful voting” along with 15 other women.

1878 – A women’s suffrage amendment is proposed in the U.S. Congress — worded exactly the same as the 19th Amendment – but is defeated.

1890 – Wyoming grants women the right to vote in all elections.

1900 – The first year every state has legislation ensuring the rights of married women to keep their wages and to own property in their own name. 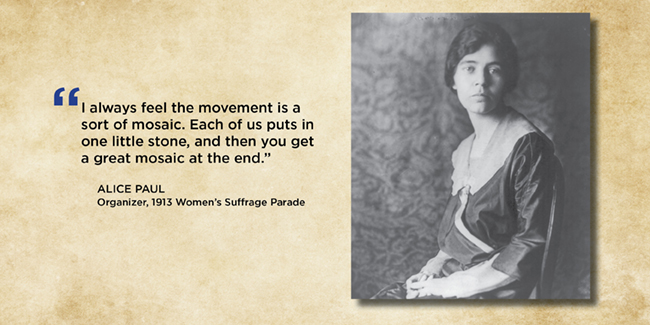 1914 – The National Federation of Women’s Clubs, with over 2 million women members at the time, formally endorses the suffrage campaign.

1915 – Mabel Vernon and Sara Bard Field travel across the United States to gather over 500,000 signatures to petition Congress for women’s suffrage.

1917 – In January, Alice Paul and over 1,000 “Silent Sentinels” begin 18 months of picketing the White House, enduring jeers and physical attacks.

In October, police warn that if the women continued to picket, they will receive sentences of up to six months in prison. The day after the announcement, Paul marches to the White House carrying a banner with one of Wilson’s slogans: “The time has come to conquer or submit for there is but one choice — we have made it.” Paul was sentenced to jail for seven months, where she was put in solitary confinement to break her will. She went on a hunger strike and was force-fed. Her plight was covered in the national newspapers, increasing sympathy and support for suffrage.

In November, the government unconditionally release the picketers in response to public outcry and an inability to stop the picketers’ hunger strike.

1919 – The Senate finally passes the 19th Amendment and the ratification process begins.